Old Snowbeard became a citizen of the United States on July 19, 1861. As stated in Hunting Old Snowbeard’s Gold,

Even in Old Snowbeard’s day, Americans were passionate about their political views. This weekend’s adventure is about the politics of the past thanks to the Arizona Digital Newspaper Program and a bit of research. Enjoy the adventure! 🙂

To partake in the election process, Old Snowbeard had to register to vote. The Arizona Weekly Champion of Saturday, July 5, 1884 reminded citizens of Cochise county to do the same with this small note.

As the following articles from The Arizona Sentinel of Yuma on Saturday, June 19, 1886 shows, political controversy ended up in the press back then. 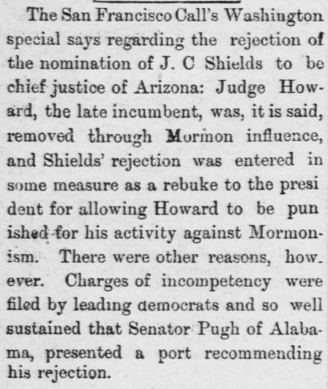 An interesting find was the Progressive Campaign shown in this article from The Arizona Republican of Saturday, October 31, 1914.

Learn more about the Progressive Party by watching this video: